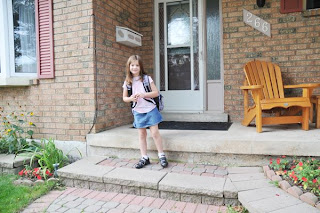 First day of Grade 1 was a success!

This was the first day of our new schedule.  I’ve shifted my schedule to start work earlier so that I can leave earlier and subsequently, BigDaddy is working later.  BigDaddy is responsible for the morning routine of getting the girls up, dressed, fed and out the door.  All went well.

Munchkin takes the bus to school so we wouldn’t be there to help her find her new teacher or classroom.  We’re very confident with the teachers and staff at her school and knew that there would be people to guide her in the right direction.  We made sure that she knew her new teachers name.  Once she was on the bus, it was out of our hands.

We didn’t get any phone calls throughout the day, so all must have been good.

After school, I got to ask all the questions.  She likes her teacher and she knows some kids in her class.  She ate all her lunch (and actually asked for more food).  At the breaks (we’re on a balanced day schedule), she played with some of her friends from last year who aren’t in her class this year.  And I was very happy to hear that the bully who was in SK when she was in JK isn’t in the grade 2 part of her class.  Phew!!!

What I’m about to tell you, I wasn’t sure if I should tell anyone at first. It made my stomach churn and I was beside myself.  But BigDaddy helped me to realize that they are sisters and these things are going to happen.  So only now can I write about it.

Last night while getting ready for bed, I overheard Munchkin say “I don’t like Peanut.”

I did a double take and said, “Pardon? That’s not very nice.”  She continues to tell me that that is what she “wrote on her person.” I guess they did a get to know you activity where they had to fill in the blanks.  And for “I don’t like” she wrote her sisters name.

Ugh.  I felt like the worst parent ever.  My kid is writing that she doesn’t like her sibling on something that will hang in her classroom.  We talked about why this wasn’t a good choice and that saying things that hurt someone’s feelings isn’t nice.  Munchkin’s response: “But she bit me!”  I can completely understand why she wrote it, but it still isn’t nice. She said that she wanted to ask her teacher if she could change what she wrote.  And she let me know that it was done in pencil.

After my head stopped spinning, we talked about what she wanted to write instead.

Me: There are lots of things you don’t like.  Like spiders.
Munchkin: But I don’t know how to spell that.

Congrats on Grade 1, Munchkin!  It’s going to be a great year!