After using the New Proactiv for 30+ days I can honestly say that my skin is clearer!

Usually when I try a cleanser, my face ends up really dry, flaky and red.  But Proactiv knows what they’re doing.

The micro-crystals in the Renewing Cleaner feel very nice on the skin and it really feels like it’s getting into all the pores and cleaning them out.

The Revitalising Toner feels so cool on the skin.

The 3rd step they call “Repairing Treatment” because it’s more that just a moisturizer. It helps to keep the acne-causing stuff away.  Like my dirty hands.  My previous skin care treatment left my face feeling dry and itchy so I was constantly touching my face.  The Proactiv moisturizer is nice and light so it doesn’t feel like I’m gooping on the cream.  The pea-size amount they tell you to use is definitely adequate and feels great!

After washing my face and following the 3 steps, my face feels great!

The number of black heads I get is greatly reduced and my break outs are much less infrequent. (The Refining Mask helps with those tho and helps them to go away faster.)

So if you’re like me, and you’ve been struggling with acne, the New Proactiv is worth a shot.  You’ll be happily surprised!

And New Proactiv has allowed 5 of my readers to get a full size, Proactiv Green Tea Moisturizer valued at $33 CAD!

*edited to select another winner as Soozle had already won!

Congrats to all of you and I’ll contact you by email.

Disclosure – I am participating in the New Proactiv Canada program hosted by Mom Centralon behalf of Guthy-Renker. I received a 30-day trial kit and a gift card a thank you for my participation. The opinions on this blog are my own.

I got this forwarded to me… and it made me laugh. So until I get an actual post written, you can enjoy this.

If you yelled for 8 years, 7 months and 6 days you would have produced enough sound energy to heat one cup of coffee.
(Hardly seems worth it.)
If you farted consistently for 6 years and 9 months, enough gas is produced to create the energy of an atomic bomb.
(Now that’s more like it!)
The human heart creates enough pressure when it pumps out to the body to squirt blood 30 feet.
(O.M.G.!)
A pig’s orgasm lasts 30 minutes.
(In my next life, I want to be a pig.)
A cockroach will live nine days without its head before it starves to death.
(Creepy.)
(I’m still not over the pig.)
Banging your head against a wall uses 150 calories an hour.
(Don’t try this at home ; maybe at work..)
The male praying mantis cannot copulate while its head is attached to its body. The female initiates sex by ripping the male’s head off.
(Honey, I’m home. What the…?)
The flea can jump 350 times its body length. It’s like a human jumping the length of a football field.
(30 minutes. Lucky pig! Can you imagine?)
The catfish has over 27,000 taste buds.
(What could be so tasty on the bottom of a pond?)
Some lions mate over 50 times a day.
(I still want to be a pig in my next life….quality over quantity.)
Butterflies taste with their feet.
(Something I always wanted to know.)
The strongest muscle in the body is the tongue.
(Hmmmmmm……..)
Right-handed people live, on average, nine years longer than left-handed people.
(If you’re ambidextrous, do you split the difference?)
Elephants are the only animals that cannot jump.
(Okay, so that would be a good thing.)
A cat’s urine glows under a black light.
(I wonder how much the government paid to figure that out.)
An ostrich’s eye is bigger than its brain.
(I know some people like that.)
Starfish have no brains.
(I know some people like that, too.)
Polar bears are left-handed.
(If they switch, they’ll live a lot longer.)
Humans and dolphins are the only species that have sex for pleasure.
(What about that pig? Do the dolphins know about the pig?)
Now that you’ve smiled at least once, it’s your turn to spread these crazy facts and send this to someone you want to bring a smile to, maybe even a chuckle.
(and God love that pig!) 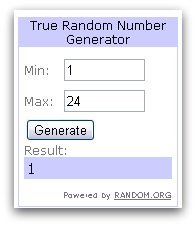 Congrats, Tracy Grant (@BarleySugar)! Enjoy the show!!
For those who didn’t win, please use the discount code BLOG when purchasing your tickets at Ticketmaster.ca to save $5 per ticket!
Disclosure: I am promoting this Disney on Ice show on behalf of Feld Entertainment.
I will receive tickets to the show to facilitate this post.
The opinions on this blog are my own. 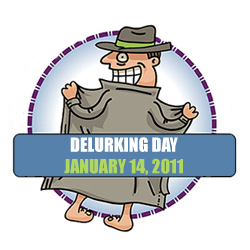 Okay… I know you’re out there!!

In the past year, the hits on my site have increased so I know that people are reading and coming back to read again!  Thank you so much!

The purpose of today is to find out who’s out there!  So if you reading this, please leave a little comment to say Hello!  If you blog and/or tweet, please leave a link to your blog and twitter and I’ll make sure to connect with you!!

(Rude Cactus sent out a nice reminder so go check him out too!)

Monster Trucks are big in our house!  Munchkin has a shirt, several trucks and a Wii game.  And when the commercial appeared on TV the other day, there was a chorus of “Look Mommy! Monster Jam!! Grave Digger!!”

Munchkin has seen the Monster Jam twice now.  The last time we saw Monster Jam, Munchkin sat watching the show with her fingers in her ears for the whole show!  We brought ear plugs for her but she didn’t want to wear them.  And even though the roar of the engines is intense, Munchkin repeatedly said that she loved it!!

I’m very excited to know that Monster Jam will be at Rogers Centre in Toronto January 23rd and 24th, 2011!  And Feld Entertainment has tickets for me to giveaway to my readers!! 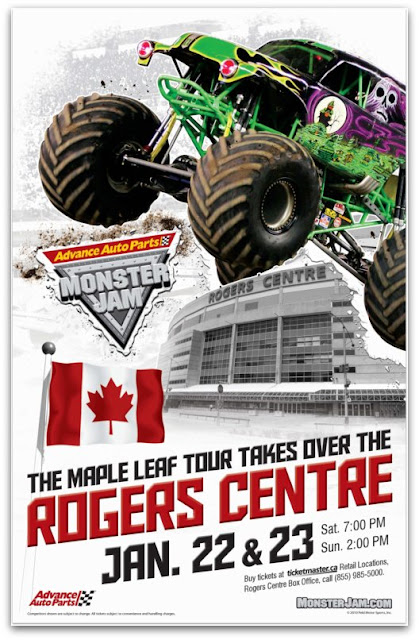 Tickets can be purchased at ticketmaster.ca.
Use the code BLOG to get a $5 discount!

You could win tickets!

For one of my lucky readers, Feld Entertainment has a
Family Four Pack of tickets to see
Advance Auto Parts Monster Jam Tickets
at the Rogers Centre in Toronto
(Sunday, January 23rd 2pm show only)

If you would like to enter the contest,
you need to comment on this post telling me
which Monster Truck is your favorite!
Be sure to include your email address so we can contact you if you win.

Please add a separate comment for each bonus entry (and these only count if you did the required comment mentioned above):

Fine print:
The contest will close Tuesday, January 18th at midnight. Winners will be contacted by email.

Disclosure: I am promoting Monster Jam on behalf of Feld Entertainment.

I will receive tickets to the show to facilitate this post.
The opinions on this blog are my own.