Good news: our foundation will be getting fixed starting Thursday!

Bad news: a week of rain

It’s been a month and a half since the leak was discovered.  For the most part our basement has looked like this 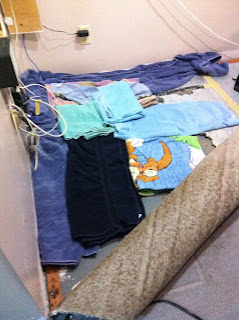 Originally we just rolled the carpet back and put down some towels.  But it kept getting wet and would take forever to dry.  The under padding was like a sponge.

Last Wednesday, I wanted to rip my hair out.  It had rained pretty hard and the water came in.  The towels and the carpet were wet.  I got out the box cutter and cut out a huge piece of carpet and under padding. The water was still coming in, but at least it was easier to clean up.

I kept telling myself… “only one more week and this will all be over with.”

After interviewing several companies, we chose who we wanted to do the repair work and we were excited to get this fixed. But the “call before you dig” people needed a week to get all the utilities marked out so we chose April 27th as a start date.

All weekend we watched the forecast.  And here is what it says today…

We were contacted by the foundation guys and they’re going to try to start on Thursday.  I guess that’s not too bad. But the rain is coming first. 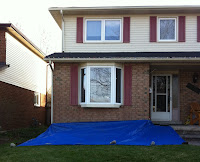 We decided that the piece of wood that he had propped up at the front of the house, just wasn’t working.  We were still getting a flood ever time it rained.  Yesterday, I dragged out the tarp and rigged it up and then prayed that it would at least slow the water down…even just a little.

I checked the towels this morning, expecting to see water everywhere.  But they were only damp!

Thursday can not come soon enough.