After working for a 1/2 day on Friday, I headed home to pack up the rest of our stuff so that we could hit the road when BigDaddy was finished his meeting. By noon we were on the road, headed for a camp ground north-west of London.  According to Google Maps, that should only have taken 2.5 hours as it is only 200+ kms.

In Branford we realized that we had forgotten the tickets for the Day out with Thomas. Ugh. So we did what any child-loving parent would do.
We turned around.
Pulled off at the next exit. Came to stop. Accelerated to turn left and we heard a sound. What was that?  It stopped.  Went over the overpass, accelerated to turn right on to the on-ramp and we heard the sound again. But it stopped again.
We made it all the way back to our house and only heard the sound when we accelerated.  We put a quick call into our mechanic to see if he could listen to the sound to see if he knew what it was.  A few weeks ago, BigDaddy had the A/C condenser replaced so we were worried that it was serious.
After grabbing the tickets from home, we headed to the mechanics.  I realised that it sounded like someone had stuck something in a fan.  So I turned off the fan in the truck and next time we accelerated, nothing happened.  We crossed our fingers that this would be an easy fix.
With the trailer in tow and kids still in the back seat, the engine was revved, the sound occurred. Tony (our mechanic) noticed that the fan belt wasn’t as tight as it should be.  We unhooked the trailer, I took the kids inside and he took the truck in the shop.  We waited. 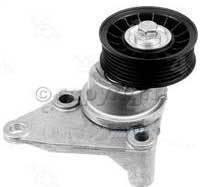 Tony walks in and says, “You’ll be happy you came back.”

“When we revved it again, the tensioner split in two.”

ho. ly. crap.
And my heart said “Thanks, Dad”  He was looking out for us. I’m sure of it.  The day before would have been my parents’ 38th wedding anniversary.

He rush ordered the part that had to be delivered from Hamilton. It was 3:30 and we hadn’t had lunch yet so I took Tony’s truck and grabbed some food.  Tony’s shop has toys and play area for the kids so they were happy to just play while we waited.
New part got installed but the condenser that had be installed prior, was putting too much strain or something on the fan and therefore the torsioner.  There wasn’t anything else he could do at that point.  We were able to leave, with the instructions to leave the A/C off.
A/C off?!?!  Yikes!
But we did it (even with a forecast of 30+o celcius).  And at 8:00pm we finally arrived at the campground and by 9pm we were in the pool!

She and her family need our love and support right now
http://bit.ly/helpstella