There are times when they are constantly bugging each other or they won’t stop whining and I think that the coaster is just going to go crashing into the ground.

Then at the last second, the ride flies upwards, sun in your eyes and the sky is so bright.

I had one of those nights last week. 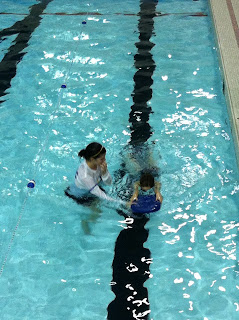 While walking into the recreation centre, I was questioning the girls on what they’re supposed to do at swimming lessons: pay attention, listen to the teacher, don’t fool around.

The first class is where the teachers can see what the kids are capable of doing.

Munchkin did everything the teacher asked.  She did 10 bobs without hesitation.  While standing in chest deep water, she dove down and picked up the rings off the bottom.  She used a flutter board and started to learn proper front crawl breathing.

She totally blew me away.  She’s getting so much braver and much more willing to try new things.

As an older sister, I knew that my little brother was always trying to do what his big sister was doing.  With Munchkin and Peanut, it’s the opposite.  Munchkin doesn’t want Peanut to do things that she can’t, so Munchkin will try things so she’s not outdone.

(By no means, do we push Munchkin to be better than her sister, it’s just an observation that is different from what I experienced.) 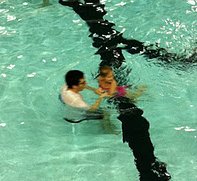 Peanut is a fish and swimming comes much more naturally to her than it does to Munchkin.  She too was able to do everything her teacher asked her to.  And I believe she exceeded everyone’s expectations.  She was asked to do a back glide and then kick her feet.  She did.  He stopped her before she swam into the rope…10 metres from the wall.  10 metres!!  My kid at 4 1/2 swam 10 metres on her back.  It was very cool to watch!!

I’m sure that none of the other parents even realized how amazing my girls did because they were focused on their own kids.  Doesn’t matter.  In my eyes they were standing on centre stage getting a standing ovation….from me!

I love this ride that my kids take me on!