With only 3 teams left, the competition is getting really hot!

If you haven’t been watching the first part of season 3, you have to watch the finale!

“Battle of the Blades is a live event competition featuring former NHL hockey players and internationally ranked figure skaters who compete each week in an elimination-style ice skating competition. The winning pair earns the Crystal Trophy and a sizable charity donation.”

The 3 teams remaining are: 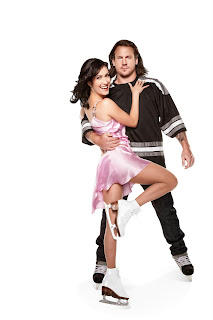 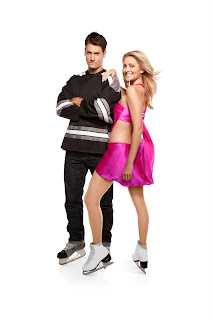 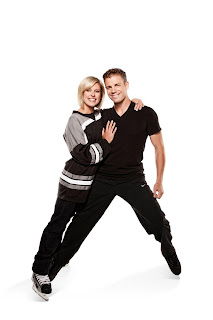 Yes, this year, Bohomme got to be the first female hockey player to compete on Battle with the Blades.

It’s not a surprise that Tessa was chosen as the first female hockey player.  She’s done a lot amazing things in her hockey career that make her an easy choice.

Tessa Bonhomme is a highly accomplished women’s hockey player and a Vancouver 2010 Olympic Winter Games gold medalist in women’s hockey. Tessa began skating at the age of 4 on a backyard rink built by her father. She played on boys’ teams until the area’s first all-girls hockey team was founded in 1998, and her very successful hockey career began. In addition to her accomplishments with Team Canada, she had the honour of beingselected first overall in 2010-2011 by Toronto in the first-ever CWHL draft. (from McDonald’s sponsorship page)

Two weeks ago, Scotiabank Hockey Club give me the chance to see all the action live, and, because she is a Scotia Hockey Club ambassador, I got to ask Tessa a few questions. 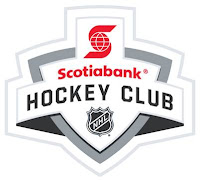 Me: Are you still finding Battle of the Blade exciting?

Tessa: Everyday is exciting. It’s something new for me and I find it difficult so I work hard at it everyday. David’s always bringing new tricks and teaching me new things. Renee is so patient and she justs laughs and has fun with me.  It’s always fun, not easy, but tonnes of fun.

Me: Do you get to work with the other teams? Have any of the other ladies shared any tips with you?

Tessa: We’ve been on the ice for boot camp with the other girls.  They are nothing but helpful.  The give me tips about lifting, about smiling and about arm work.  I’m pretty lucky that they’re so friendly, nice and thoughtful.  They are a great groups of girls and I’m so thankful we have a great cast.

Me: As the female hockey player being the female of the pair, what has been your biggest challenge?

Tessa: My biggest challenge is portraying the emotion and being soft and not so hockey strong; having soft arms.  Slowly but surely, it’s coming. I feel like our last few routines that Dave and I had where I was wearing a dress, I got a lot better.  Hopefully Sandra [one of the judges] will notice and pick up on it soon and things will go great from there.

My last question I asked on behalf of Munchkin.  When I told her that I was going to talk to Tessa, Munchkin wanted to know why figure skaters don’t wear helmets.

Tessa: Oh, gosh! I don’t know because there are plently of times when I think I should be wearing a helmet out there for the things that I’m trying. I’m not sure, but that is a very good question.  She’s smart!

Backstage there were so many people wanting to talk to her so I was very thankful for the chance to talk with her.

I can’t wait to see how they do!  She sure is a fan favorite! 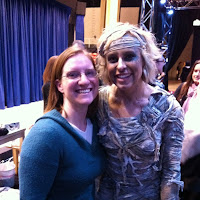 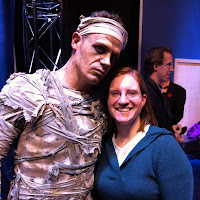 Me with Tessa and David!

So now that there are only 3 pairs left — be sure to watch the Battle of the Blades final on Sunday, November 13th on CBC!

A big thanks to Scotia Hockey Club for this amazing opportunity!