Last night the girls and I had our own mini-Super Bowl party.

BigDaddy was at an amazing Super Bowl party at Labatt HQ celebrating with the 2 hockey teams that were featured in the Budweiser Canada Super Bowl commercial.  Read BigDaddy’s post to hear all about the commercial — A Dream Come True For @Acurasherway — thanks to @BudCanada 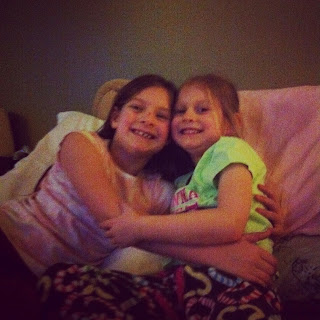 The girls and I enjoyed our wings, milk (for them) and beer (for me) while watching the game.

I was explaining things to them like how downs work, how big the field is and what some of the positions are called.  Munchkin had a lot of questions!

But some of the comments and observations were too funny not to share with you!

After the game started, Munchkin asks, “Who are we cheering for?”
Peanut replies, “I’m cheering for Canada!”
Me: “Canada isn’t playing.  Both of the teams are American.” 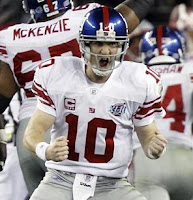 Peanut: “But they look like Canada; they’re wearing red and white.”

She was looking at the Giant’s uniforms that were white with red numbers.  We did cheer for them and I was excited to see them win.  The girls didn’t see the end because they went to bed after the halftime show.

Peanut wasn’t all that into the game at first.  She declared, “That guy is mean!”  I asked her to explain.  “He just picked up that other guy and threw him on the ground!”  LOL!! I told her that there was a lot of contact and they guys would be hitting each other a lot; that’s why they’re wearing pads.

At one point during the game the girls were whispering and giggling.  I had to ask them what was so funny!.  Peanut tells me between giggles, “The big guys have to bend over and stick their bums out.”  That made me giggle too.  The perspective that they have is too funny!!

During the halftime show, the girls were excited to see all the costumes and dancers.  They’ve never seen Madonna before and I can’t say that I’ve ever played her music for them; at least not enough that they know who she is.

Munchkin and Peanut are dancing to the music and part way through Munchkin looks at me and says: “Mommy, how do you know all the words?”

The biggest, most exciting moment for them didn’t have anything to do with the game itself.  While BigDaddy was at the Super Bowl party, they filmed another commercial and he was in it!  Standing behind the General’s hockey team, you could see BigDaddy!  The girls went crazy!!  “Daddy’s on TV! Daddy’s on TV!!”

We haven’t found the video yet…but someone did share a photo with us!! BigDaddy is at the top right! 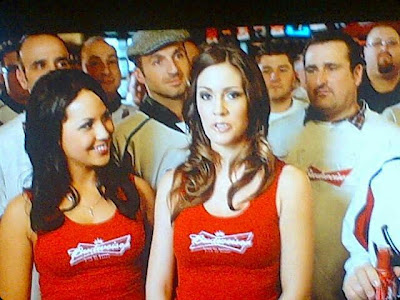