I heard these words come out of my 6 year old’s mouth:
“I want to cut if for cancer.”
I stopped in my tracks. Paused. And the only thing I could say was “Really? Go tell your father what you want to do.”
Then I cried.

My little girl wants to give something so precious and the thought came so naturally; without hesitation.

Leading up to this, all I had said was that we should think about get her hair cut because I wanted her to start taking care of the brushing and washing herself.  It would be easier if it was shorter.

Since May 2011, she has been growing her hair so that it would be long enough to donate.  And is so proud when she tells everyone what she wants to do with her hair.

Christmas Day 2011, my brother asked Rachel (nee Munchkin) if she would like to get her hair cut when he shaves his his head.  For the last few years, my brother has participated in Cops for Cancer by fundraising and getting his head shaved.

Lauren (nee Peanut) has since decided she wants to donate her hair as well.  This is going to be an amazing day!

The girls are very excited because their Uncle will get to cut their hair on stage in the middle of Square One!

Not only are they donating their hair, but they’re raising money as well!
They have their own page where you can pledge money to support the Canadian Cancer Society!
Please click the link below and show your support!
Any donation is greatly appreciated! 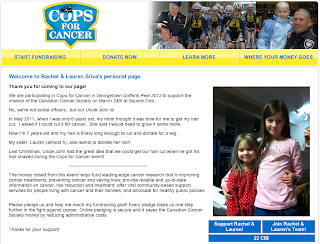 Thank you for your support!!
We’ve raised the goal twice since we started!!
Thank you to everyone who has helped so far!