What a weekend!!  We had a tonne of fun with the “big kids” from our church and ended the weekend relaxing with our “little kids” (and there’s a video below of one of our kids).

Craig and I spent the weekend with 9 “big kids” from our church’s Senior Youth Group (grades 9-12).  It was a lot of fun!  We headed to Emerald Lake campground on Friday night. After checking in, the kids got to work setting up their tents and getting organized.  We had a late dinner followed by relaxing around the campfire.Saturday was spent at the lake.  They had huge, blow up water toys!  There were trampolines, log rolling, teeter-totter and rock-climing-type thingy (not sure what it was called).  The kids spent a lot of time trying to run from the big trampoline to the smaller one across the “moonwalk” to get to the smaller trampoline on the other side.  A few kids were successful…but we all had fun trying to get across. 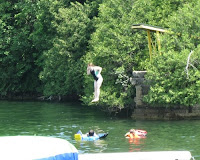 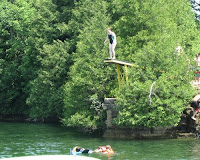 We also jumped off the cliff.  That was a LOT of fun!!

Dinner was late that day with an even later campfire.  A few kids stayed up chit chatting around the fire until the wee hours of the morning.

After a few hours sleep, we got up and started packing. The sprinkles of rain kept us moving because no one wanted to be stuck outside if it decided to rain harder.  After a quick stop at Timmy’s we were on our way home.

Craig had taken some of the kids back to Oakville but I head to Niagara Falls to get our “little kids” who were very happy to see me when I got there.  Once were were home, unpacked and took the trailer back to the storage stop (we can’t keep in our drive way for the summer anymore because some crazy person in our neighbourhood called by-law and they tried to slap us with some ridiculous fine.Fortunately, our friends down the street were having their Sunday night gathering so we didn’t have to cook!  The kids played in the pool and we were able to relax!

I did hop in the pool for a bit and helped Rachel learned to dive! We started on one knee and after 3 times doing that, she tried from her feet!  Way to go Rachel!!!

It was a great weekend!!

How was your weekend??