You are here: Home / Archives for Life / parenting

Today I didn’t ask the girls how their day was.

I’m never asking “How was your day?” again!

No, that doesn’t make me a horrible mother.  I’m tired of feeling that I’m pulling teeth to get an answer out of them.

They don’t know?!? They spent 8 hours there, they had to have done something!

Then they would  ‘um’ and ‘ah’ and try to recall every little detail. “First we had carpet time and then we went to the gym and then we had music and then we…”  I love them, but that is hard to listen to everyday.

I don’t want it to be that hard, so I’m not asking “How was your day?” any more!

Today, during dinner, I asked…

“What was the best and worst parts of your day?”

The answers were a million times better!

You could tell that they were excited to tell me about the things they liked.  They didn’t have to stop and think about what came next in their day.   Rachel was excited to tell us about a game that they played in the classroom and Lauren liked that they got to make some art for the hallway outside their classroom.

The “best” was best, but the “worst” really was worse.

When it came time to talk about the worst part of their day, I really wasn’t prepared for the answers.  I was hoping for “I didn’t want recess to end” or “I don’t like having to sit still for so long”.  Instead we had to hear about how the bully was up to no good…again.

This time, however, Lauren was the one who got hurt.  The boys that Rachel had been playing with started rough-housing. The bully and some other kid came over to join in and Rachel was trying to get them to stop. Lauren, unknowingly, ran across the play ground to see Rachel and the bully lashed out and hit Lauren.  Rachel took her to the office and told the Principal what happened.  Not even two weeks into the school year and we’re dealing with the wrath of this kid again.

Make the best out of a bad situation

We used this as a great moment to come up with some strategies on how to deal with this kid.  We talked about staying away from him on the play ground (thankfully, he’s not in Rachel’s class; he’s in the other grade 4 class) and if he comes around that they need to walk away.  We suggested to Lauren, that she stay with her friends on the playground so there is less chance of the bully coming around her.

It sucks that that we have to tell our kids to be on heightened alert when they’re supposed to be having fun and enjoying themselves, but with this kid on the loose, they can’t be too careful.

As much as I didn’t like the answer, I loved that by focusing the question on a specific part of their day, we got to hear so much more than we normally would!

Do you struggle with your kids to get them to tell you about their day?? What strategies do you use to get your kids to open up?

for the inspiration for my title.)

There are many many milestones that a child has to hit over their lifetime.  Just google “child milestones” and you get any number of websites telling you what your child should be doing and by when.   I’ve blogged about some of them.

Well guess what, Google!  You missed one!

Age 8: Child will have the ability to pick up dog poop in the backyard
…and will offer to do so voluntarily

(and this makes a new milestone for my blog — I’ve moved from talking about baby poop to dog poop. Writing excellence, right here folks!) 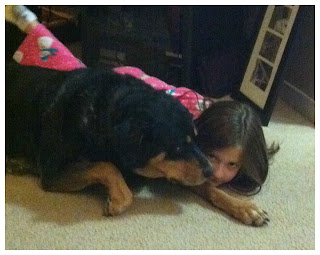 Yes, you read that correctly.  Rachel offered to pick up poop in the back yard.

Let me take you back….

It was a bright Sunday afternoon.  I was standing in the kitchen cleaning up after lunch.  My beautiful daughter decided that would be a good time to ask me if she and her sister could go out back and play.  Since I always want to encourage physical activity and fresh air, I asked that she wait just a few minutes until I could go out back and tidy up after Dakota (the poop machine).  I was wrist deep in soapy dishwater and wanted to finish the dishes first.  She piped in, “I could do it!”

Stumbling over my words, I agreed.  She grabbed a bag and out she went.  A few minutes later she came back in and very proudly exclaimed that she was all done! Two very happy girls, ran out side to play in the sun.  I gave my head a shake because there was no way that whole thing just happened.

I am happy to report that this is now a part of her regular chores around the house! Parenting win!

Recently I received an email from a company asking me to review a product that was for tweens and teens.  Sadly, I replied back and thanked them for choosing me, but since my daughters are only 6 and 8, we don’t have any tweens or teens to help evaluate the product.  That was that and I went on about my day.

Later, they emailed me and said that my 8 year old fits in the “tween” category and would I still be interested in trying the product.  I agreed to try it because I like the product, but I was still in shock.

Dictionary.com defines tween:  “…tween, tweeny. a youngster between 10 and 12 years of age, considered too old to be a child and too young to be a teenager.”

“too old to be a child and too young to be a teenager.“

Really?  Too old to be child?  According to whom?

Media and marketing people…that’s whom.  If they can widen the age range in what they label as “tween” then now have a bigger demographic to market their products.

This article from the nj.com says exactly how I feel — Marketing to Tweens – making our kids grow up too fast

“Tweens have had their own identity and their own idea of independence forced upon them by a culture that tells them what to buy and how to grow up. This false autonomy bestowed upon the Tween generation is an unnatural alternative to the autonomy these children should be developing on their own.”

And that is where we as parents come in…

How do we allow our girls to develop their own sense of self with out too much pressure to grow up too fast?

I think Craig and I doing great so far!

She loves to read, write and draw. She loves to ride her bike, play games in the back yard and draw with sidewalk chalk.  I hope she never feels that she is too old play.

Rachel isn’t a “girly girl” so that might have something to do with it.  She doesn’t like Barbies or Bratz dolls and she doesn’t like frilly and pink.  This means that she doesn’t like a lot of the “you need to grow up too fast” clothing that comes in her sizes.

She doesn’t spend a lot of time on the internet, and when she is, she is limited to a few sites that we have approved.  She has asked about when she can get a Facebook account but we stress that there are rules and she need to wait until she’s 13.  Hard rule to follow when other kids her age already have accounts.  (That’s a whole other blog post right there!)

Lauren (who’s only 6 right now) may lead a different path. Currently she’s into pink and bling and all the cutesy clothes that are marketed at her age group. We’ll continue to guide her, like we did with Rachel, to be respectful of herself and to choose outfits that are appropriate.  I’ll re-read this post when Lauren is 8 or 9 because I could see her being a different type of “tween” than Rachel.

So have I been under a rock?  I can’t be the only one who feels that 8 seems too young to be considered a tween!

I’d love to hear others’ thoughts and feelings.

It was a little over a year ago that I posted this photo — ww: women’s size 5??
And now I can fit in to her shoes?!?! They are snug…but I can get them on!(Oh, and for the record, I wear a Women’s size 7)
Share your Wordless Wednesday post!

“Ain’t nobody happy unless mom is happy.”

This saying is all well and good, but without confidence, many moms end up second guessing themselves

At a twitter party a few weeks ago, one of the questions was “What is the best advice you give a new mom?”

My answer: “Don’t listen to all the advice!”

For me, being a StrongMom, means

“Make the choice that is best your your family.”

And there are so many choices you can make:
Disposables or Clothdiapers
Breastfeed or Formula
Crib or co-sleep
Ferberize or Baby Whisperer

I could go on and on.

If you know in your heart, that what you are doing is right for you, your partner, your family, then THAT what matters.

It took me a very long time to figure all of that out.

But all I found was noise.  Battles. Wars.

Then I stopped worrying about what everyone else was going to think.  I stopped waiting for someone else to tell me what to do.

With fresh eyes, I went back to the books, websites and forums.  I went back looking for information about the topics that I wanted to know about.  I was doing research on my terms.

I was also aware of how I gave my opinion to others.  I had to be informative without being pushy or overbearing.  I knew how those other new moms were feeling.  I didn’t want to come off as a bully.  I just explained what was working for us and hoped that what I shared was helpful.

This same mindset is important for my girls to understand.  They are going to have to make many choices in their lives. They will be faced with many challenges where they have to do what is right for them. I can only hope that the example that I set will be a strong enough foundation for them.

So moms out there...the next time you spout off your opinion, don’t do it as if what you say is the be all and end all.  Share your information with others as encouragement and as one piece in a very large parenting puzzle.

Have you taken the pledge??
It’s time for moms to feel good about the decisions they make for their children and their families. The StrongMoms Empower campaign is a call-to-action to create a more supportive and less judgmental environment, online and off.”
Take the pledge today!
http://strongmomsempower.com