You are here: Home / Archives for mapsgirl 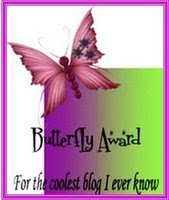 T over at Too Much Perfection? honoured my blog with this pretty award!  Thank you!!!

And now I get to honour some of my favourite blogs!

But, of course, there are rules:

1. Put the award up on your blog
2. Add a link to the person who awarded it to you
3. Nominate at least seven other blogs
4. Add links to these blogs on your blog
5. Leave a message for your nominee on their blog

I hereby nominate:
Good Enough Mum
daysgoby
My Crazy Life With Boys
Scrapping With IkeaGoddess
Scarcastic Mom
A day in the life of
Better than a Playdate

Peanut say so many things (and I do plan on posting a list of the 100s of words that she said) but today she finally said her sister’s name! Munchkin’s name is made up of “R”, “C” and “L” which can be tough to learn. Until today, she’s been calling her “Sister”, which is still really cute. It will be nice when she says her name too.

Today’s going to be a busy day. We’re still working on the master bathroom; today we’ll finish painting the cupboard and finish the floors and install the toilet.

Also we need to go to Canadian Tire to get wiper blades for the vehicles. A trip to Costco is in order (oh darn) because we need pork chops and chicken breasts. They’re bound to have their Christmas decorations out so that will be fun too.

Right now I’m just waiting for Hubby to get up. The girls and I are watching Arthur…while I drink coffee.

Luckily we haven’t gotten any yet, but my dear friend Kia did!

Even though we haven’t gotten any snow, it’s be really cold. I was sure today that I was going to with the “Mother of the Year” award for sending Munchkin to school in just a raincoat. But Daddy is a smart man and got Munchkin to put on a warm fleece sweater, before wearing her raincoat. Thanks Daddy!

Munchkin’s winter coat still fits (for now) but Peanut has nothing. Peanut is too big for the 18-month size snowsuit and too small for the size 3 snow suit. Munchkin wore those at 12 months and 2 years old…yes, she’s a tall kid.

Off to Once Upon A Child we go. And they had the cutest pink, 2-piece snow suit! Peanut was great and let me try it on her. It’s perfect! I heart OUAC! Why pay full pop for something when you can get one that is barely worn.

I just have to work on mittens. I’m hoping Please Mum has the cool velcro ones again.

Today I fit in the “not so bad mom” category as I sent my kids off in their winter coats with no mittens or hats.

Oh, and Hubby says it’s not allowed to snow until the snow blower get delivered. Guess we’ll have to wait and see who wins that race.

1 : the quality or state of being anonymous
2 : one that is anonymous

This is something that I have tossed around inside my head for a while now.  There is a lot of information that floats around in cyberspace and I want to make sure that I can control that which I can have control of.  Does that make sense?

So what that comes down to is…privacy settings on my facebook account so that only friends can see what I put out there, making sure that my home phone number isn’t posted anywhere, and not directly putting mine or my families’ names out there unless I know it’s safe and a bunch of other stuff.

I know that there is a lot that I can’t control cuz “big brother” is always watching.  But I’m gonna do my best.(and I hope that my friends and family who read/reply/link to my blog can understand this)

So there you have it.  Let’s see how this goes.

That’s how long it took me to get home last night. Ugh.

3:40pm – Get in the van and switch over to 680News radio to get the traffic. There’s a collision on the 401 and it’s slow, so I decide to take the Gardiner/QEW home.

Travelling south on the Gardiner was fine and as I made the turn to go west-bound, things slowed a little which is normal. It picked up a bit until I reached Royal York.

Traffic had slowed way down and we were crawling a long. I was still listening to the traffic reports and heard about the collision “just west of Kipling”. Thinking that I was pretty close and would pass it and just go on my way, I didn’t try to take a different route. They said that the left hand lane was open and people were still able to pass.

I finally get close to the Kipling bridge where Kipling goes over the QEW and a police officer goes backwards down the shoulder. He makes his way into the lanes about 10 cars behind me and closes the express lanes. Crap. This can’t be good.

While waiting in the traffic, I watch a guy jump out of his van, hop over the median and go into the Johnny-On-The-Spot that was there for the construction workers. Then his passenger did the same thing. Why not, we weren’t going anywhere quickly.

We get under the Kipling bridge and the car in front of me over-heats. The guys is throwing his hands in the air and is visibly frustrated. I managed to get in the lane beside me and I asked if he needed a phone to call anyone. He said that he didn’t have anyone to call. I called *OPP to let them know that he was stuck.

Since were were on the Gardiner, they transferred me to Toronto Police. I had forgotten that the Gardiner is under local jurisdiction. I explained where he was and what the car looked liked and they said that they’d send some help. I got a call back “Hi, this is Toronto Police. Where did you say he is?” “The express lanes of the Gardiner just west of the Kipling bridge.” “But that part of the highway is closed.” “Yes, we are the unfortunate people still stuck in the express lanes. They closed the Gardiner about 10 cars behind me.” “oh, okay, thanks” Poor dispatcher who can’t see what’s going on was a little confused.

So I chugged a long. The collectors for a while were still open which is strange. Not too far past the Kipling Bridge, the collectors and express become one, just before the ramp to the 427 north. So 8 lanes of traffic are coming together to try to go into 1 left lane to get pass the collision. What a night mare.

I had to laugh when I thought of my friend, Dawn. She would have completely lost it if she was stuck in this mess!! She hates driving in the city!!

I tried to see what was going on. There were many emergency service vehicles (fire trucks, ambulances, police cars) and I could see cars and stuff but not enough to figure out what happened.

This is what happened:

Toronto – It was a traffic nightmare for motorists heading out of downtown during the evening rush, Wednesday.

All lanes on the westbound Gardiner Expressway at Kipling shut down at around 4:45 p.m., just before highway 427 because of a multi-vehicle crash.

At least seven vehicles – including a mobile crane – were involved in the collision.

Part of the reason for the delay in clearing this mess was that an inspector had to be called in to make sure the crane was safe to move – as there was concern about its breaking system.

No injuries were reported.

So by 6:00pm I was finally home. Luckily, Hubby had already planned something for dinner. He was BBQing on the back deck while the girls played in the backyard. A very nice thing to come home too.

I need a job closer to home.