Today started at 6:20am when the school board called to say that the schools are closed. I peeked outside and the snow had made our yard, the street and the yard across the street look seamless. It was pretty.

By the time we actually rolled out of bed, the plow had been by and the blowing wind built drifts everywhere.

We did get snow but I don’t think it’s any where near the 30-45cms they were talking about.

I tried to see if there were any reports of the total accumulation but nothing yet. I’ll post that later.

BigDaddy will be getting the Big Orange Monster out to blow the snow! The girls are looking forward to playing in the snow!

As much as we didn’t get the amount of snow, with the blowing snow, the roads were horrible so I’m very glad I stayed home.

No snow yet.  However it is getting very, very windy.

And Oakville’s Storm Warning, now uses the words “Near Blizzard“.

(Go here to read the other posts)

This is the forecast for today and tomorrow from Environment Canada: 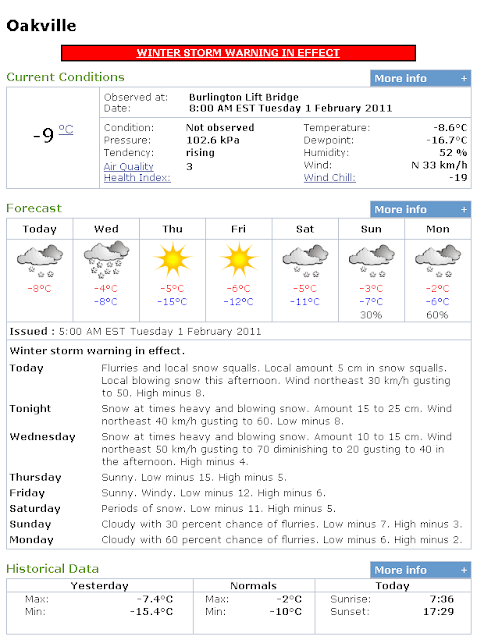 Now math has never been my strong suit, but

I’ve already booked tomorrow off and I’m leaving early today.  With 50-70 km/h gusts and all that snow, driving would be insane.

Tonight I will stock up on hot chocolate and prepare for a day of playing in the snow tomorrow!!