You are here: Home / Archives for volunteer builders

New facade for the Comfort Station!

…and we built 2 Pavilions…

(NOTE:  All structures were completed at the end of the weekend. I just had to leave early) 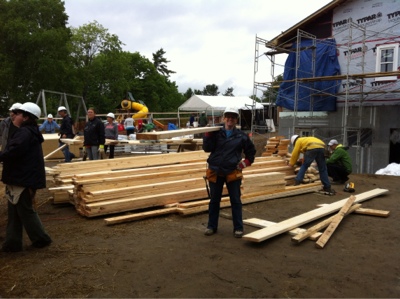 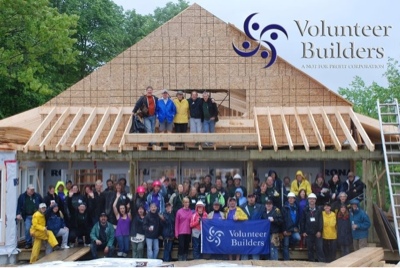 Get up.
Brush teeth.
Have a shower.
Dry hair.
Get dressed.
Remember that you need grab sock from the dryer for the girls.
Run to the basement.
Walk into laundry room.
Flick light on.
Splash.
Look down.
Find yourself standing in a stream of water.
Curse and swear.

Generally, I’m not a fan of Mondays to begin with and now this.

I followed the stream of water, back along the wall back into the rec room area of the basement to find that the carpet is wet. The wetness goes around the corner and under BigDaddy’s desk!

I run upstairs and quietly whisper to BigDaddy. “I’m not going to work today. The basement has a leak and it’s under your desk.”

He curses and swears.

We spent the morning moving stuff around the basement, getting it out of the corner. BigDaddy’s desk and computer had to be moved. And I’m not sure how we got so much stuff, but we have way too much stuff.

We put in a phone call to some friends who have a construction company to find out what we do next. They suggested that we cut some of the dry wall to see if we can figure out where the leak in the wall is and there could be a drainage/grading issue outside.

Our next phone call was to another construction friend who is also a home inspector who is trained in mould detection. He said pull back the carpet and get some fans to get things dried out.

By the end of Monday night, we had narrowed down where the leak is coming from and had rounded up 4 fans. BigDaddy’s desk was out of the way and he was able to work. Albeit, he was a bit cold from all the fans, but still working. We also got some down spout extenders to make sure that the water goes as far away from the house as possible.

I went to bed that night praying that it didn’t rain again.

Tuesday night, BigDaddy had a Volunteer Builders executive meeting. So we got more input from more construction people. It is very nice to know construction type people…so many resources to choose from. We were under the impression that nothing could be done about our problem until the spring but that’s not the case.

Yesterday, one of those construction guys, Scott, came over to take a look at our wetness problem. He concluded that the outside of the foundation needs to be fixed, the bottom 2 feet of drywall on 2 walls and the carpet needs to be replaced. 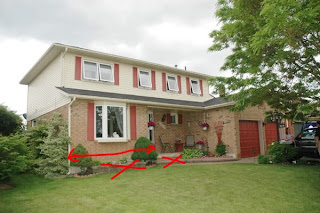 Our next step is to get a hole dug outside. Scott going to see about getting a bobcat/digging-type machine to do the digging. If not, we’ll hire a couple guys to dig it by hand. That is definitely not our first choice as it will take the longest. And we’re not taking a little hole. We’re talking 4 feet wide and the complete depth of our foundation! That’s huge!

They’re going to have to remove the interlocking brick steps and part of the walk way and the planter box under the window.

Then he’ll repair the wall to stop the water from coming in and regrade it so the water drains away from the house better.

The next couple weeks are going to be a bit crazy.  The girls are going to love it if he can get the digger thingy.  They love trucks and machines. And I’m sure BigDaddy will take lots of pictures which I can share with you.

And what makes this even better? Peanut’s 4th Birthday party is at my house on March 12th.

They say, “When it rains, it pour”. They weren’t kidding.

At the end of the build at Camp Couchiching last year, we were all introduced to Camp Winston, the recipient of our services for the 2010 Build.
They showed us this video.  Please stop and watch the movie. You will truly understand why we were so inspired to do this build.
At the end of the video, we all cheered!  A lot of us were in tears.

Volunteer Builders is a not-for-profit organization that devotes one weekend each year to build a “closed-in shell that includes siding, roofing, windows and doors at a children’s camp. At times, they have also provided electricity, decking and some interior work, such as staircases and bunk beds.”  BigDaddy and I are so excited to be a part of something so magical.  BigDaddy is on the PR/Marketing team and does all the print graphics for VB.  I just like to get my hands dirty.

While at Camp Winston last weekend, I learned so much about the amazing things that they do for the kids.

Here is what is on their site:

Camp Winston’s primary focus is to set our children up for success. We operate four, two-week summer sessions attended by a total of 120 campers aged 6 – 17 years from across Canada. In most cases, this is the first time in their lives they feel welcome and secure enough to participate without being rejected or alienated by their peers.

Campers have a complex combination of neurological disorders which include:

Campers are encouraged and supported as they participate; often for the first time – in various recreational activities including various sports, swimming, tubing, kayak and canoeing, crafts, theatre, ropes courses, nature studies and canoe trips. While having fun, they learn vital social and gross motor skills specific to their needs.”

I’m so glad that the kids now have a safer place to be this summer.  We were able to give them new decks on the maintenance building, new stairs to the boat dock, a safer newly-painted play structure and a new building for their medical staff.  Also, through a very generous donation, we were able to install solar panels on one of the buildings.  This will put energy back into the grid and help to make money for the camp.  It’s truly awesome!